“Whatever you can do or dream you can, begin it. Boldness has genius, magic, and power in it.”  – Johann Wolfgang von Goethe

At Kilachand Studio Theatre in December 2016, the wonderful graduates of the Acting for Adults course at DUCTAC presented a superb variety of solos and short scenes from theatre throughout the ages. First-timers and seasoned performers alike all shined brilliantly in excerpts from both classical and modern drama, including Ibsen, Chekhov, Neil Simon and, of course, Shakespeare.

The actors’ tremendous work, courage, and thus talent, make these showcase finales magical. Putting together a show is seldom an easy task, but no adversity can stand in the way of an amazing group of people working towards such a special goal. This love’s labour is never lost. 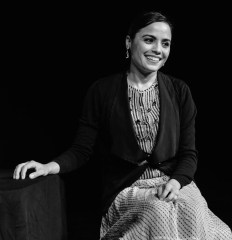 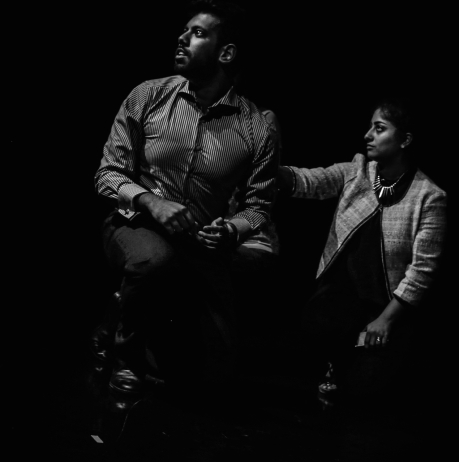 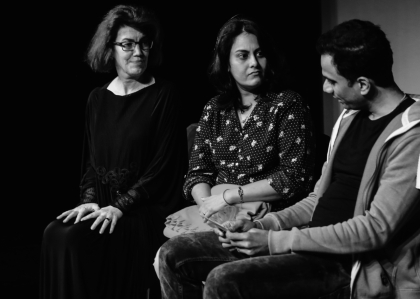 The performers’ generosity toward one another and audience is possibly the most touching aspect of such an event, making it so meaningful and memorable. On those extraordinary nights, no one is alone, even when doing solos, supported in spirit by an entire troupe. The proverbial butterflies are no match for their fighting spirits and the random blunders on set can’t dampen their style (ask a 2016 graduate about table legs and cashew nuts to learn more about that ;). And, of course, it takes many hours of study, thirst for knowledge, diligence and practice on top of honing one’s insight, intuition, imagination and boldness to make it happen. The actors-in-training all share these formidable qualities and at the root is an awesome will to actualize a dream, or simply turn an idea into something real.

Participants of the Acting for Adults course at DUCTAC come from all walks of life, their journeys crossing paths with other genial dreamers. To ring in 2017, some of these powerhouses offer their take on action, inspiring a great start to a year ready to be filled with what will one day be cherished memories:

In less than a year, my childhood dream of wanting to be an actor came true; and thanks to Sol’s guidance I stood in the limelight, owning the stage and deeply bitten by the bug.  Being on stage is my new high; performing for an audience, telling a story, being the character, the energy of rehearsals / costumes / props, sharing space and time with like-minded, passionate and talented people is something that has changed me completely. I used to live life in Shakespeare’s words of “All the world’s a stage..” and I acted for the audience that was watching my every move. Funnily, drama classes taught me something so different – to act on stage but stop acting in real life. It has been the most liberating journey. I have experienced power, energy, light, love, laughter, confidence, enrichment, and joy. I am a newer, fresher, happier me. – Sailakshmi Deepak

I thought I was already a confident speaker but the Part 1 course gave me a whole new insight that added an extra dimension. I really discovered another side of myself. – Judith Finnemore

Taking Sol’s acting classes is easily the best decision I took after coming to Dubai. That was my first baby step into the world of theatre. The best part about the classes are the showcases, where actors get a chance to display their talents. My first ever ticketed event was also courtesy of Sol. One performance led to another and now I perform quite regularly (touchwood). – Siddharth Gollapudi

The experience for me was mind blowing! There is so much potential in all of us and that magnificent characters can be formed out of our free imagination. Taking this acting for adults course is one of the main reasons I finally started writing my book. It is simply supremely inspirational to realize that any reality can be invented through belief. It might make you think twice about living miserably waiting for those voices to talk sweetly to you or for happiness to knock at your door 🙂 I realized I make up who I am. And that is not a schizophrenic reaction (lol). Although close enough as I am now creating those voices and telling them what to say. Isn’t life the story we tell ourselves? In front of an audience is how you practice believing in it. Make it happy for you. That’s what I learned in this course. When you dismiss fear, a child comes out: a happy one, so don’t be afraid to be vulnerable. We’re all connections of the plays of the heart. – Salam Atoui Chami

I did a level 1 course in 2014 and it was absolutely fantastic; a great experience. Not only did I realise that there was an actor in me (if I could hone it!) but the way Sol effortless brought us, a very diverse bunch of 15 odd folks, together, to learn and have fun, was commendable. I whole-heartedly recommend this course, whether you are exploring theatre as a serious career opportunity, or for personal development! – Dipti Vaid