In this production, actors live on stage interact with performers on video projected on the set. The SUAD Theatre Group has taken on the challenge of this hybrid project, combining theatre and film. In addition to mix media, the multilingual cast performs portions of the script in English, French, and Arabic.

Mouawad’s play is a burlesque, dark comedy. Characters in an absurd family feud are forced to live together in one apartment, where the only washroom is occupied by a defiant adolescent. The piece is allegory of war, displacement and isolation, all too ominous in a post-pandemic world. Here the theatre offers a way of reflecting artfully on these pertinent and relatable issues.

This academic year, SUAD students and actors practiced scenes with on-screen actors, in an abstract and virtual set.

MEETING WITH ONE OF FRANCE’S NATIONAL THEATRES

In 2021, the SUAD theatre group had the great honour to be invited on a private virtual tour of the Parisian Théâtre de la Colline, one of 5 national theatres supported by the Ministry of Culture in France, under the directorship of Wajdi Mouawad, award-winning playwright whose work the SUAD group has adapted again this year.

This is the group’s first production at Zayed theatre since the pandemic. All are welcome free of charge 24 March 2022. Doors open 6:30pm. Show starts at 7pm. 14 days valid PCR is required. 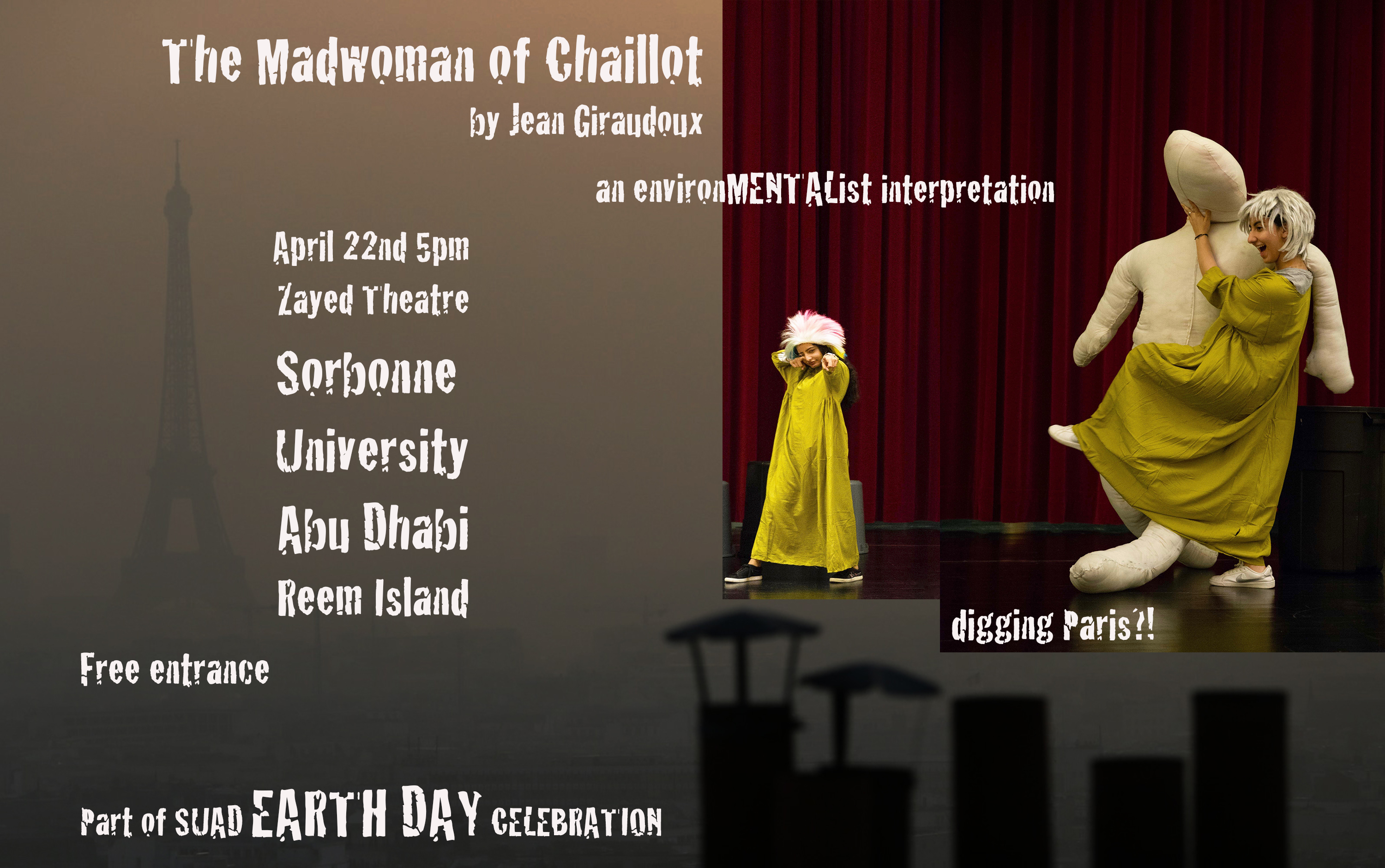 The Madwoman of Chaillot written by Jean Giraudoux in 1943 naturally addresses environmental issues and this particular adaptation focuses on absurd reasoning (or lack thereof) behind the short-sighted pursuit of profit.

Unhinged characters played by an all-women cast and interaction with multi-media bring an old story to life for the present day – when the message is as important as ever for a sustainable future. 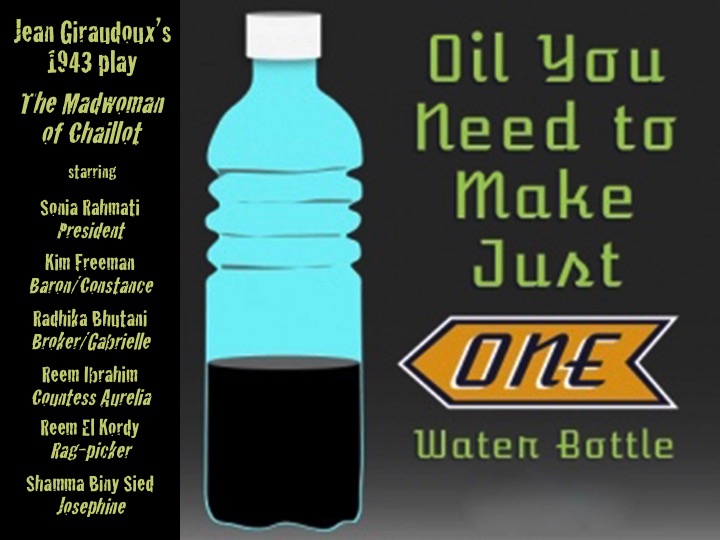 Exceptionally this year, S.U.A.D. theatre production will be in English, welcoming visitors who can also enjoy an eventful programme including key note speakers on environmental issues, product demonstrations, musical performances, art exhibit and food trucks all in the spirit of reducing our carbon footprint.

This October marks the final instalment of the Acting for Adults classes for 2017 at DUCTAC. What’s the best by far about this course is the people; always a gathering of courageous and mutually supportive participants, eager to learn and share their talent. The “troupes” that come out of this course are simply inspirational.

Respecting individuality and at the same time fostering group-work is a core value of this acting programme. Designed for both absolute beginners and a little bit more experienced performers looking for some skills-maintenance, students explore the craft in a fun while professional theatre setting. Honing their performance and stretching their imagination-muscle, learners delve into a variety of key subjects including: improvisation, voice & movement, Shakespeare for beginners, character development, scene study, and presentation style. In 6 action-packed 2-hour sessions, the learning process involves theatre games-playing, informative talks, acting exercises and scene-creations. Beyond artistic development, students can also benefit from boosting communication and interpersonal skills.

Extra study material, such as play synopses and scene samples, is provided online by the professor. Dress code is comfortable clothing to be able to fully engage in lively, creative low-physical impact activities.

To join the 2017 finale troupe and get a chance to perform at Kilachand theatre together this winter, contact Dubai Community Theatre and Arts Centre on: 04 341 4777 or e-mail: box.office@ductac.org. 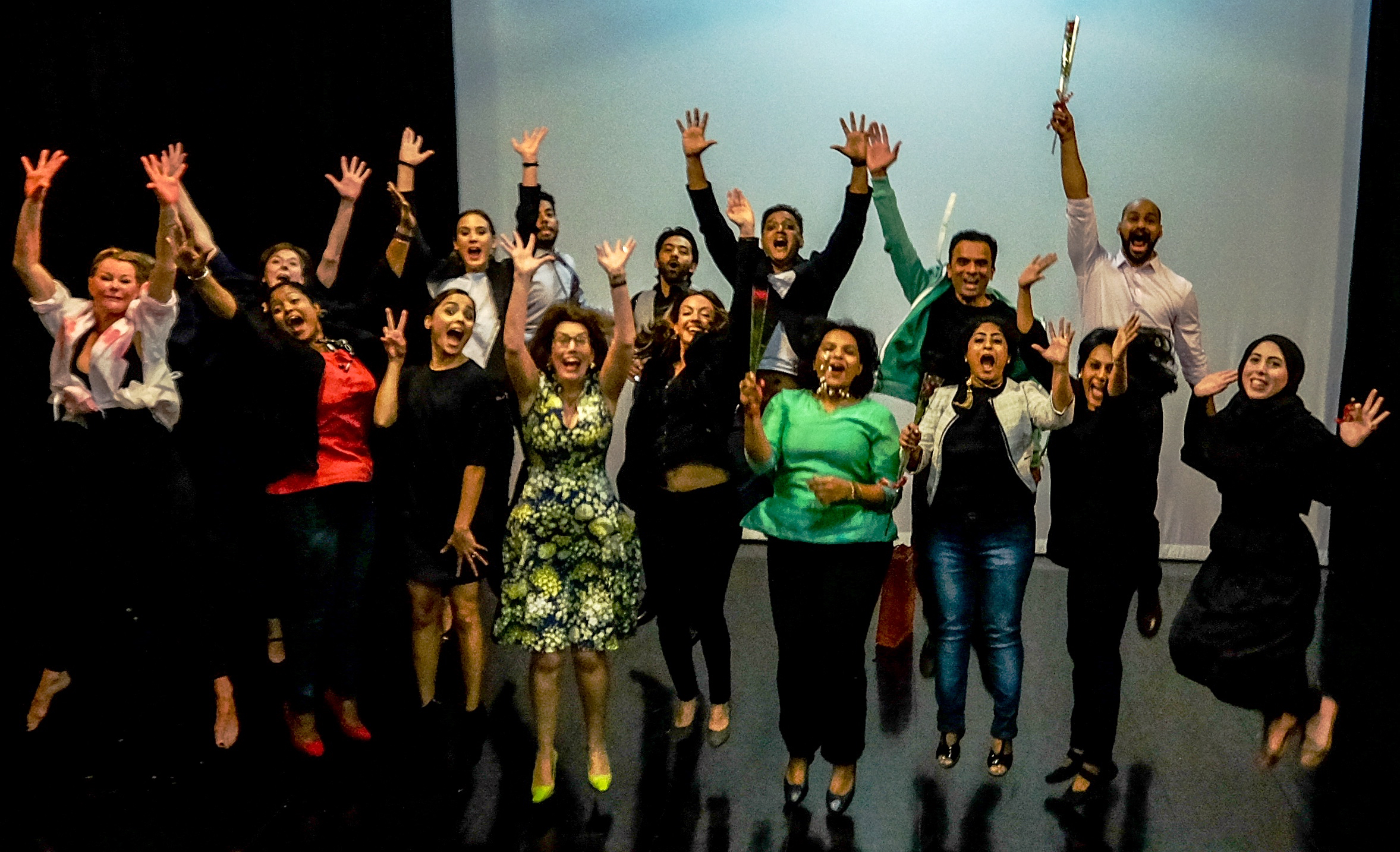 To read about the course and testimonials, visit: https://acttoodubai.wordpress.com or www.acttoodubai.com

Price: AED 1,200 (any session missed can be made up free of charge throughout the year)